SQL Server is adapting, so must its users

The next generation of SQL Server skills won’t be about making it even faster, more reliable or more secure – as an industry we’ve already cracked that and there’s little left to learn.  Instead, they’ll be about executing predictive analytical models and integrating with open source data platforms.  To help with the former, Microsoft has just published a free insightful and educational eBook about “Data Science with Microsoft SQL Server 2016” (link). 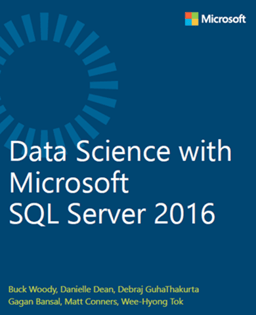 New data users you won’t yet have met

The fact the book’s title says “Microsoft SQL Server 2016”, not just “SQL Server”, is the first hint that this book is designed as much for newcomers to Microsoft’s data platform as it is for familiar audiences.  That doesn’t just mean it has introductory paragraphs that readers familiar with SQL Server can ignore.  It has several paragraphs that describe how SQL Server works using terminology that data scientists – the next generation of SQL Server users – will be familiar with.  Learning how they “see” SQL Server is more important than reading the text and thinking “well I knew that already”.

Knowing how data scientists talk about a Microsoft transactional data platform will be an important skill.

New features you won’t have used

Some of the new features in SQL Server 2016 are completely new.  Not just a new type of high availability feature or table index – but the ability to query Hadoop data or execute R queries.  Without a conversational knowledge of these technologies, even the most seasoned SQL Server professional won’t be able to answer questions as simple as “is our database server the best place to execute my model written in R?”.

Knowing how to design and where to deploy predictive models will become a critical data platform skill.

Out of things to learn

Some people like to keep learning and can’t stop, and I’m one of them.  But after a few years, there’s only so much you can motivate yourself to learn about how SQL Server works.  The transactional database engine is a tool the industry as a whole has mastered.  While each vendor has both strengths and feature gaps, collectively we have 30 years experience of designing and operating transactional relational databases.  The next generation of data technologies will be about making discoveries and predictions from the data stored in those transactional databases.  This requires a different toolbox of querying languages, query engines and data storage.  SQL Server is adapting, so must its users.